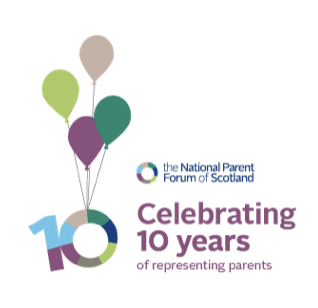 On Wednesday 26thFebruary, a members’ debate took place at the Scottish Parliament as part of our 10thAnniversary celebrations.

The debate celebrated our work over the past 10 years, including the Learning Together Action Plan and our ‘In a nutshell series’ for parents. It was a great opportunity to reflect on the development of parental engagement in education over the past decade, as well as chance to look forward to what the next 10 years will bring. The empowered system, where parents are included as equal partners in education alongside teachers and other stakeholders, was a key theme in the debate when discussing the future of parental engagement.

During the debate we heard from a variety of MSPs who have supported the NPFS over the years, and we would like to thank Gail Ross for stepping in and making sure the debate happened. We would also like to thank Jenny Gilruth for her ongoing support of parental engagement and the debate prior to her appointment as Minister for Europe and International Development.

The debate saw Jamie Greene make his first speech in the Scottish Parliament since being appointed the new Shadow Education Secretary, where he expressed how he is looking forwards to work collaboratively to ensure that parents play a key role in education. Clare Adamson and Iain Gray shared kind words about the work of the NPFS, both of whom are on the Education and Skills Committee.

The parliamentary session concluded with a speech from the Deputy First Minister and Cabinet Secretary for Education and Skills John Swinney, who highlighted the importance of the forum in representing parents and shaping policy:

“The forum’s involvement is used to shape policy, but it also reinforces a fundamental issue that I signal tonight, which is the warm welcome that our education system expresses for the involvement of parents in their children’s learning. It is a fundamental requirement of the education of children and young people that their parents are fully and actively engaged in their learning.”

John Swinney thanked our Chair Joanna Murphy, and former Chair Iain Ellis, for all of their contributions to education policy and parental involvement over the years, as well as extending thanks to forum members and all of those they represent.

If you missed the debate, it is available to watch on Scottish Parliament TV https://www.scottishparliament.tv/meeting/members-business-national-parent-forum-of-scotlands-10th-anniversary-february-26-2020, and a transcript of the debate is available here: http://www.parliament.scot/parliamentarybusiness/report.aspx?r=12540&i=113334&c=2243657