In the lead up to results day on 6th August, we’re sharing young people’s stories in Scotland through the #MyLearnerJourney Communications Campaign.

#MyLearnerJourney showcases and celebrates young people’s achievements across a diverse range of awards, qualifications, learning pathways and progression routes and not just those certificated on Results Day. Success isn’t all about exams and university is only one route to a successful career.

School is not just about attaining the highest level of qualifications, but also about receiving the best possible experience. The focus of this Communications Campaign is on Alternative Pathways as we celebrate Wider Learner Success and Achievements, including getting into college, work or an apprenticeship. Each individual’s definition of success is as valid as another.

As parents, you have a responsibility to make a positive difference by supporting and encouraging your young people to reach their potential. Learning outside of school is as important as formal learning.

Encourage your young ones to share their success stories outside of the school gates in the run up to Results Day on August 6th 2019. Whether it’s a Saltire Award, Duke of Edinburgh Award, a volunteer story or an example of a positive destination – we want to celebrate the fantastic achievements of our young people.

Look out for #MyLearnerJourney from 15th July across social media channels which celebrate and promote Learner Success Stories in Scotland. Other social media campaigns promoting a similar message are YouthLink Scotland’s campaign which showcases young people’s achievements through youth work and #NoWrongPath (Developing the Young Workforce’s campaign to promote the message that there are many people in interesting jobs that might not have taken an obvious path to get there).

Have a read of John Swinney‘s  #MyLearnerJourney blog on: How we can Celebrate all forms of Learner Success with a focus on Alternative Pathways & Wider Achievements.

Click on any of the links below to learn more about some of the Wider Success Stories shared on social media through #MyLearnerJourney.

and many many more…!

Rachael on her learner journey: 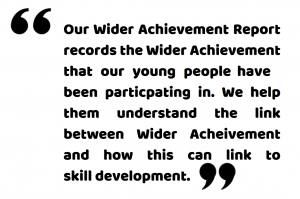