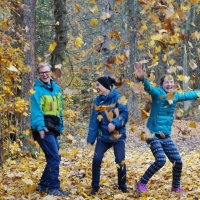 Richard Louv is a journalist and author of nine books, including Last Child in the Woods: Saving Our Children from Nature-Deficit Disorder; The Nature Principle; and Vitamin N. Translated and published in 24 countries, his books have helped launch an international movement to connect children, their families and communities to nature.

In 2008, he was awarded the Audubon Medal, presented by the National Audubon Society. Prior recipients have included Rachel Carson, E. O. Wilson and President Jimmy Carter.

He speaks frequently around the world and he will be the Key Note speaker at Play Scotland, the national organisation for play, 20th Anniversary Seminar in Edinburgh on 21st September.

Marguerite Hunter Blair, CEO Play Scotland said “Play Scotland is delighted to welcome Richard Louv to Scotland. His books about the importance of connecting children with the natural world have convinced many of us that contact with nature is as important as food and sleep for children to grow, develop and achieve their full potential.

As keynote speaker at our Nurture Nature Play in Scotland seminar, we hope Richard will inspire the wide ranging audience to go out and create more opportunities for children and young people to access play and learn in natural environments.”